Utah Olympic Park offers families and adventurers of all ages opportunities to watch Olympic athletes train AND take part in adventures themselves!

On the last day of our Mother-Son Park City, Utah adventure, we spent the morning at the Utah Olympic Park.

We crammed SO much into our short time in Park City: we hiked the Silver Lake Trail up Bald Mountain; adventured at Park City Mountain Resort; had a relaxing stay at The Chateaux; explored downtown Park City; and enjoyed amazing meals at Silver Star Cafe, Brass Tag, Royal Street Cafe, and Tupelo restaurants. My son and I were both pretty tired by the time we reached the Utah Olympic Park, so we were happy to take this time to explore the park and watch the athletes train.

The Utah Olympic Park was built for the 2002 US Winter Olympics, and now is an official Olympic Training Site.

The photos seen here are of mostly summer activities, and winter activities are now in full swing (as of October 25th). That said, you can still get a good idea of the scope of the park and its facilities through these photos from our trip.

During the summer months, winter athletes come here to train using Utah Olympic Park's Freestyle Pool. This allows them to practice their jumps with less chance of injury, since they jump into a low impact pool instead of constantly hitting the hard snow each time. Plus: there's no snow in the summer, so it's a great spot to train off-season!

My son and I really enjoyed watching the different techniques of each athlete while they trained. There are viewing areas all around the freestyle pool, and we saw many folks enjoying snacks or a light lunch while watching the athletes train.

These athletes are AMAZING!

From there, we walked down to the Ski Jump area.

We took the ski lift up the mountain to the top, where the longer of the two sets of ziplines launches. It's also where the athletes start their ski jumps.

Here's a look at the top of the jump area:

Yes, it's high up and steep. However, the view is absolutely incredible from the top.

We spent about 30 minutes here, watching the athletes wait for their turn, prep, then do their thing. 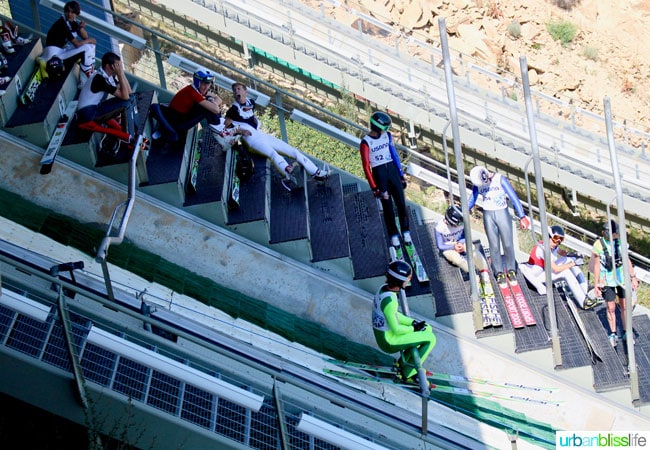 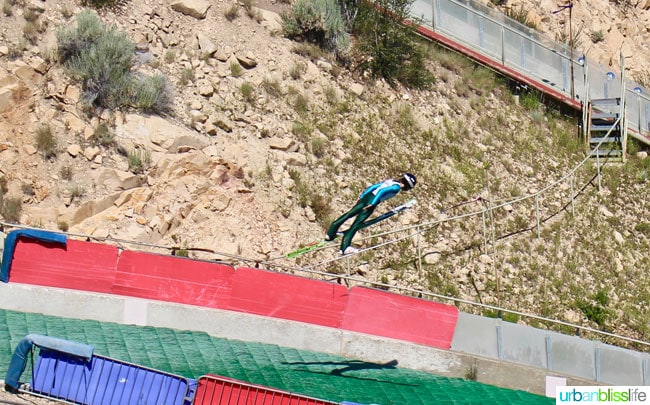 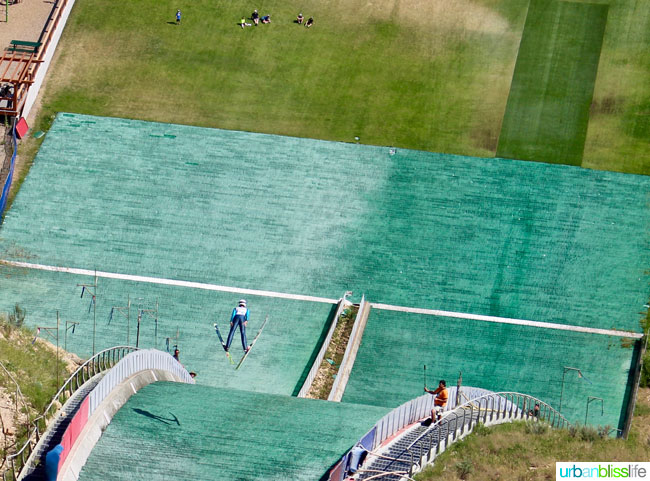 Just like the Freestyle Pool, watching the athletes train on one of Utah Olympic Park's three ski jump areas was awe-inspiring.

If you don't want to climb up to the top, there are plenty of stadium seats down on the flat ground where the athletes finish their runs.

I had planned to zipline while were were here, but unfortunately we ran out of time. Everyone we saw flying down the mountain looked like they were having a blast, though!

There are two sets of tandem ziplines at the Utah Olympic Park. The highest point at the top of the longest ski lift started above where the ski jumpers began their runs. You zip down from the top of the mountain, over their heads and down to the base of the park.

What a cool experience!

On the other side of the ski jumps, a shorter tandem zipline starts almost at mid-mountain and goes over the adventure course. The smaller tandem zipline was definitely utilized more by families with little kids.

If you're looking for fun but not extreme fun, try the activities in the Discovery Zone. You can climb and do small ziplines on the adventure course next to the ski jump area.

The Discover Zone also houses a rock climbing wall perfect for kids of all ages, but especially the younger ones.

There are two museums within the park: the Alf Engen Ski Museum and the George Eccles Salt Lake 2002 Olympic Winter Games Museum. These are great for families that have history buffs and/or budding athletes, and they don't take much time to go through. There's also a gift shop inside the main winter sports center where you buy your tickets and passes for activities.

Now that it's the winter season, the most daring adults and kids ages 16 and older can try the Comet bobsled ride at Utah Olympic Park. For $175, with a seasoned bobsled pilot, you can experience the official 2002 Olympic Sliding Track and reach speeds over 60 mph and notable g-forces.

The park offers MANY different day rates, camps, family passes, and more; I suggest visiting their website for the latest. The GOLD pass is what we had, and it gets you into any activity for the day. If you have adventurous fellow travelers who don't want to miss any of the fun to be had at Utah Olympic Park, I definitely suggest the GOLD pass.