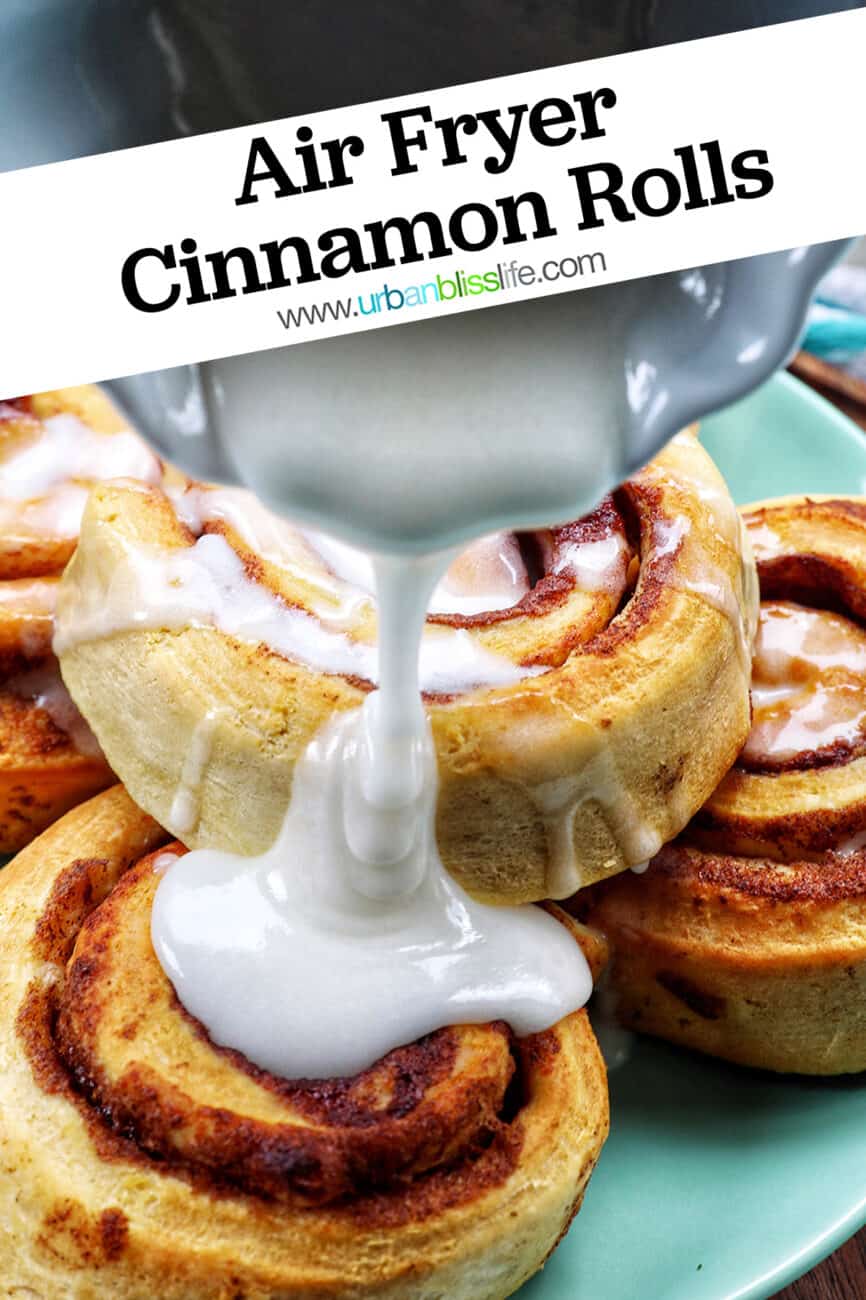 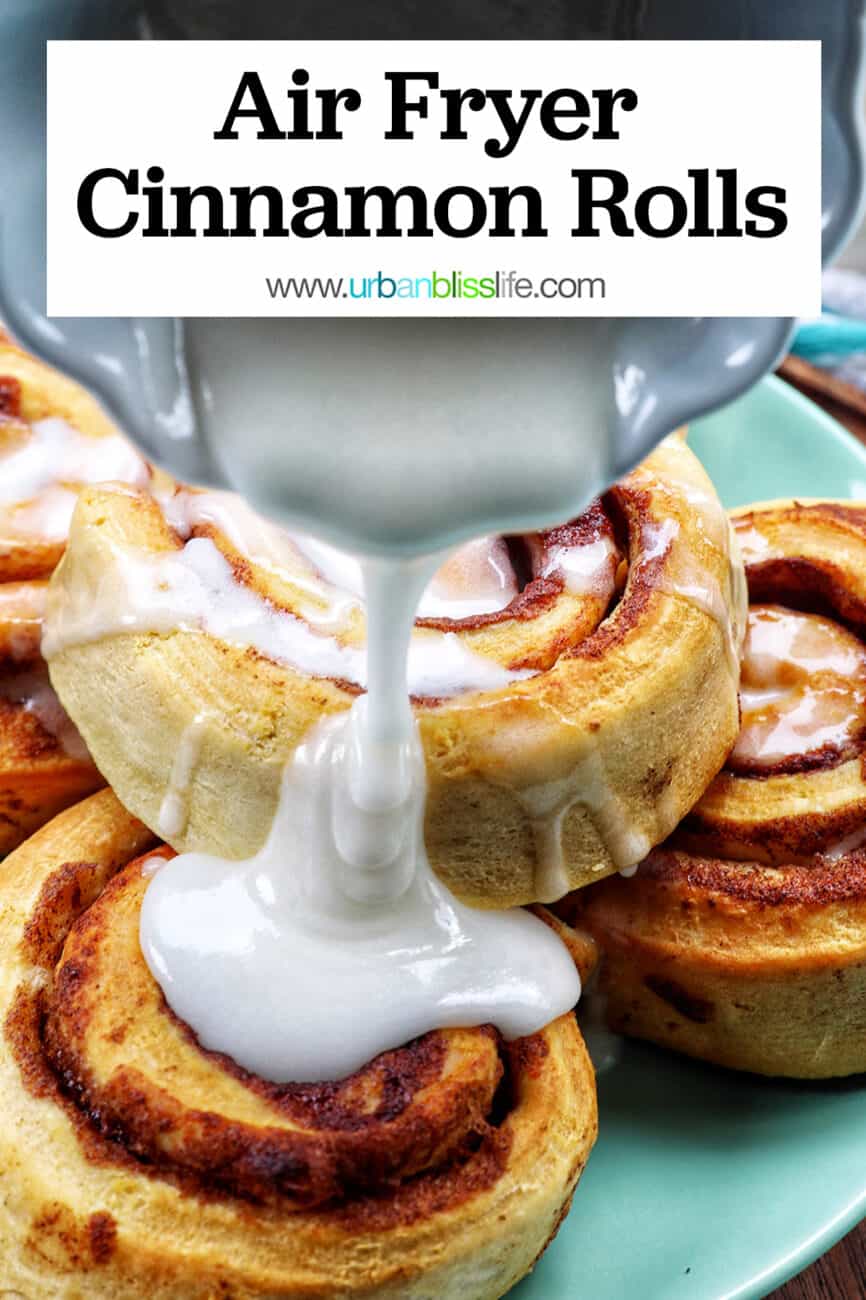 When you want a delicious, fast, and easy breakfast, it's hard to beat making Air Fryer Cinnamon Rolls. This is the best way to make packaged cinnamon rolls!

Cinnamon rolls are a delectable, sweet breakfast pastry. I love to make cinnamon rolls from scratch when I have the time. But on busy weekday mornings, or busy weekend mornings when we need to head out the door, I reach for packaged cinnamon rolls.

And the best way to cook packaged cinnamon rolls is in the air fryer!

Why make cinnamon rolls in the air fryer?

A few reasons why making cinnamon rolls in the air fryer is the best:

For this recipe, we use the Pillsbury Grands cinnamon rolls, which come in a package of 5 cinnamons rolls.

Preheat your air fryer at 350°F for 2-3 minutes while you open the package of cinnamon rolls. Set aside the icing that comes with the package.

Place the cinnamon rolls on the air fryer basket or trays an inch or two apart in a single layer, as they will expand during cooking. You can see how much they expand by comparing the photos of uncooked cinnamon rolls above and the finished air fried cinnamon roll photos below. Depending on the size of your air fryer, you may need to work in batches.

Air fry at 350°F for 7 to 9 minutes, until the outside of the cinnamon rolls is a nice golden brown.

Remove and place on a plate and spread the icing that came with the package over the cinnamon rolls. Serve immediately.

Allow to cool to room temperature then store in an airtight container in the refrigerator for up to 3 days.

The best way to reheat cinnamon rolls is in the air fryer. Air fry at 350°F for 3 to 5 minutes, just until they are heated all the way through.

For this recipe, you just need a one main kitchen tool:

Air fryer - You'll need a 6-quart, 8-quart, or 10-quart air fryer for this recipe. We make this in our 10-quart Ninja Foodi Dual Zone Air Fryer.

What goes with cinnamon rolls for breakfast?

The best companion to these air fryer cinnamon rolls? A large mug of piping hot coffee.

They are also delicious when enjoyed with Crispy Air Fryer Bacon and some Salsa Eggs. Or try drizzling some Homemade Raspberry Jam over the rolls instead of or in addition to the icing.

If you are making a large breakfast or brunch spread, consider adding these air fried cinnamon rolls to a Brunch Charcuterie Board.

Looking for more breakfast recipe ideas? Try one of these yummy recipes to start your day!

Did you make this recipe? Don't forget to leave a 5-Star 🌟🌟🌟🌟🌟 rating in the recipe card, and if you really loved it, please leave a comment further down on the page. Thank you! 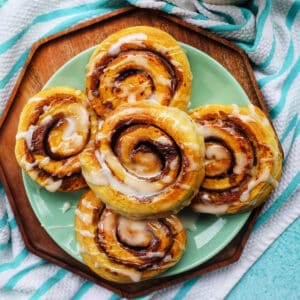 Air Fryers: every air fryer is different, and you may need to adjust the cooking time depending on your air fryer. This recipe has been tested using the Ninja Foodi 10-quart Dual Zone Air Fryer.  Storage: Allow cinnamon rolls to cool completely, then store in an airtight container in the refrigerator for 3 or 4 days.
Tried this recipe?Please leave a star rating and comment! Then snap a pic of your dish and share it on social media. Tag @UrbanBlissLife and #UrbanBlissLife!