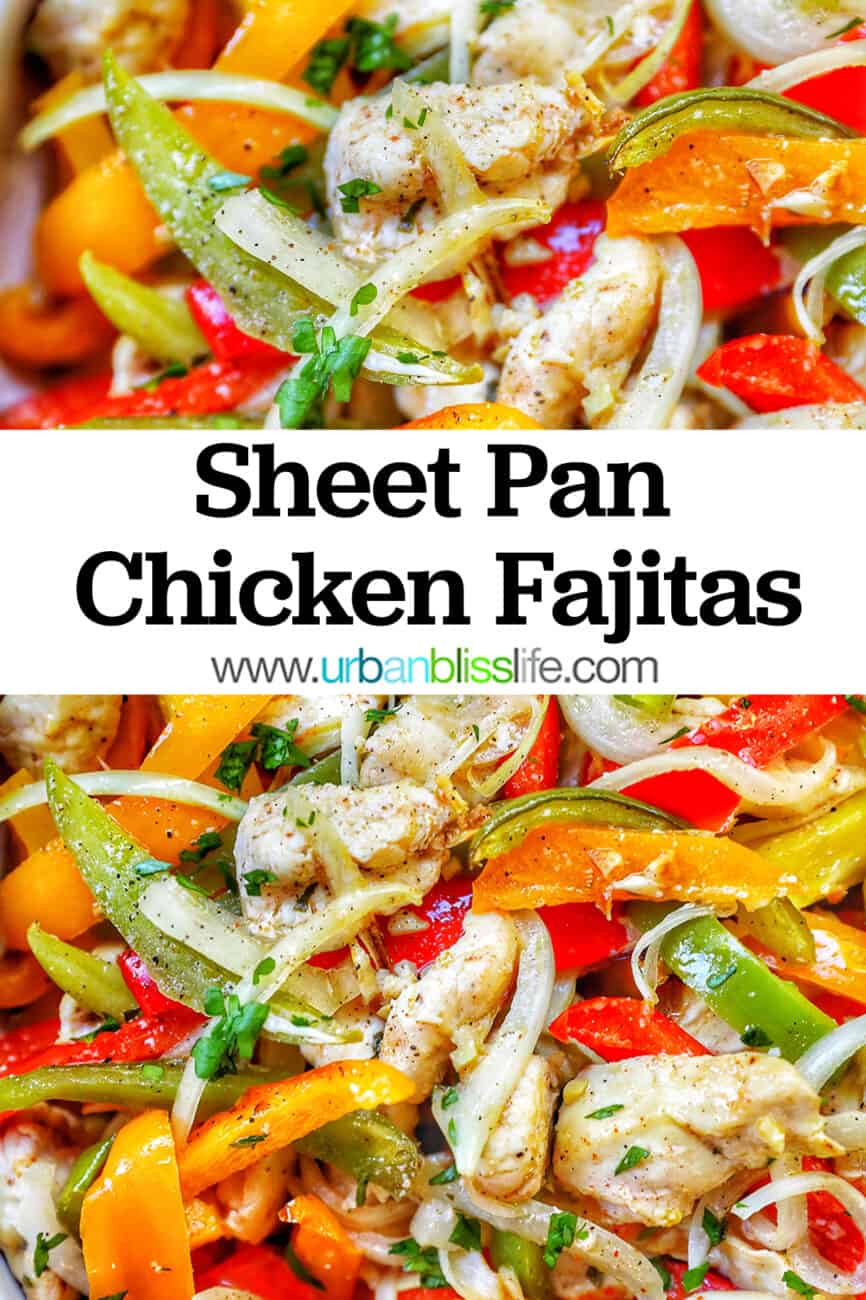 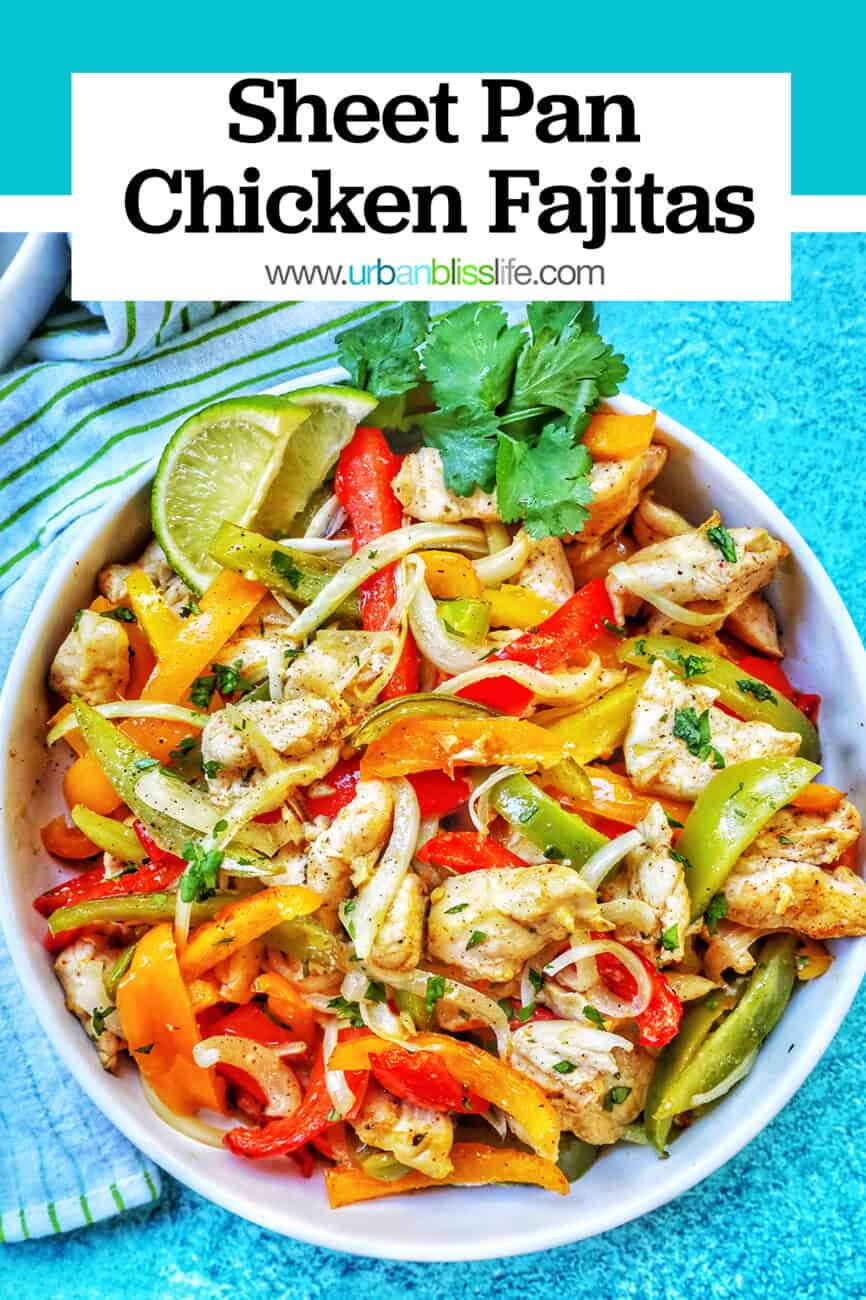 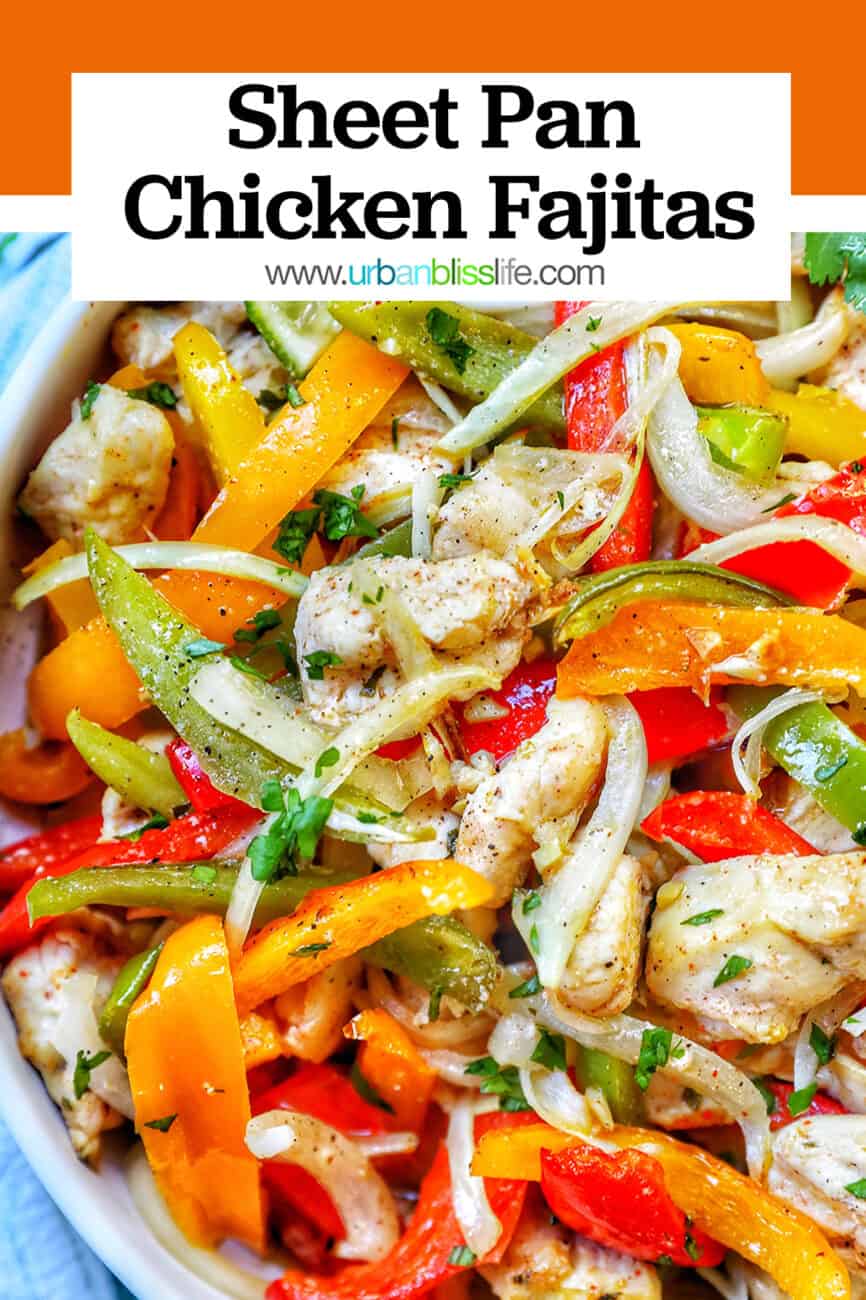 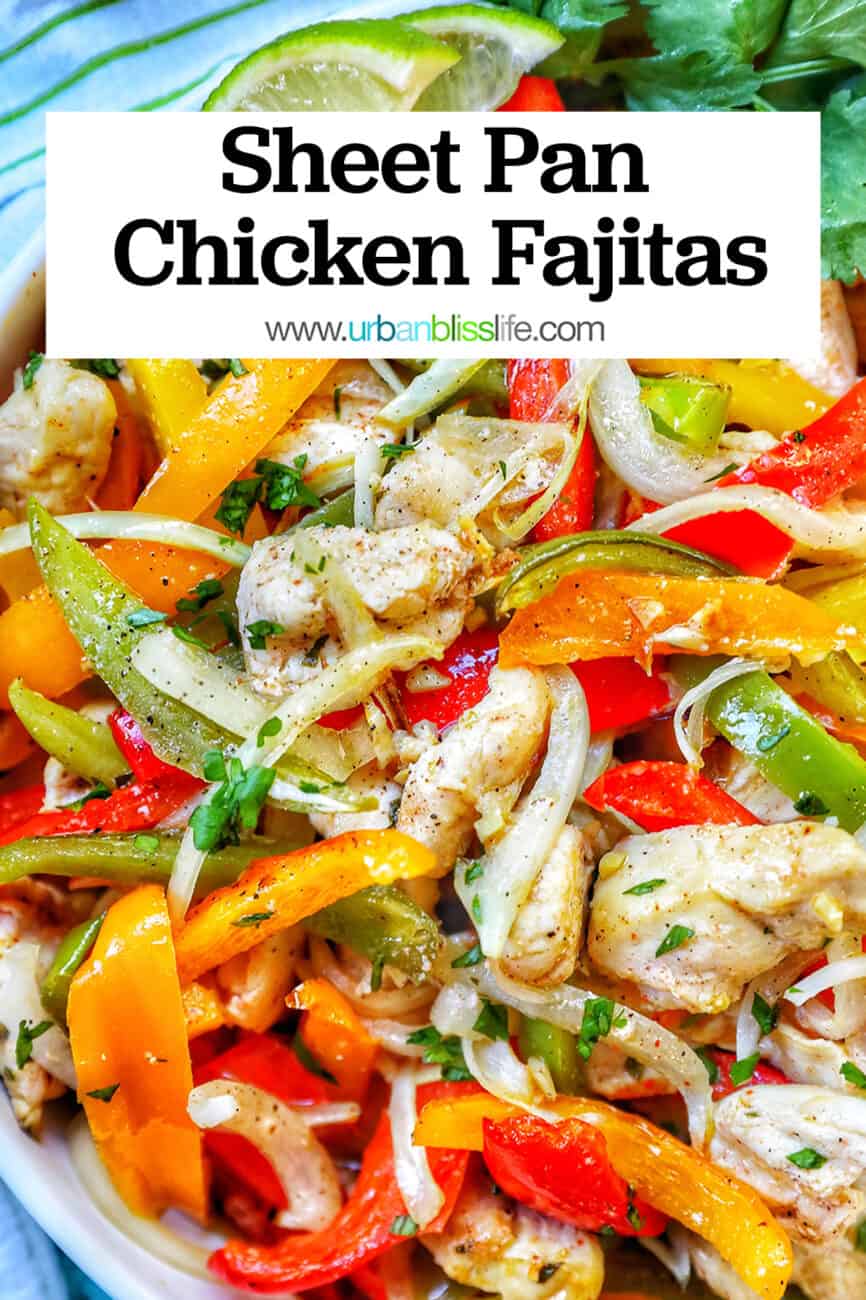 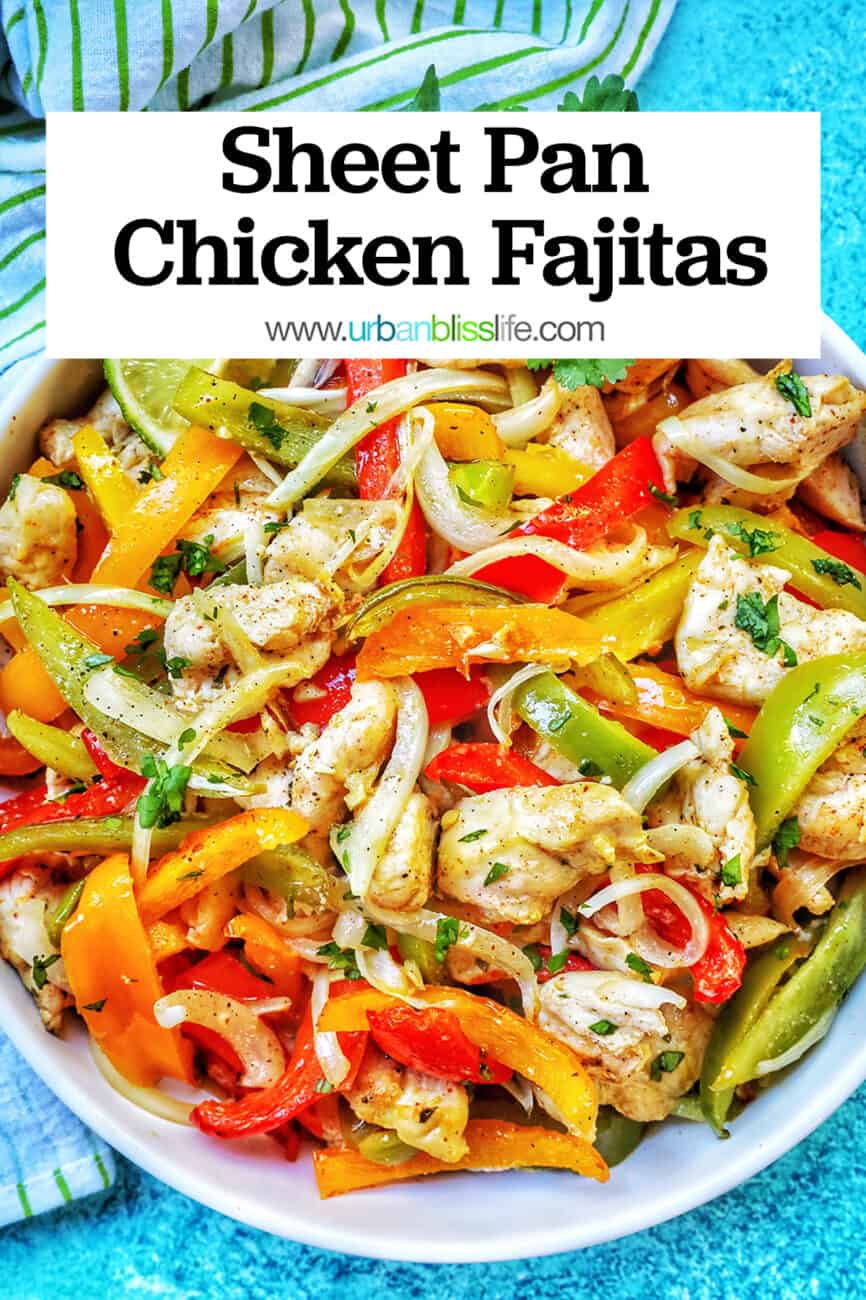 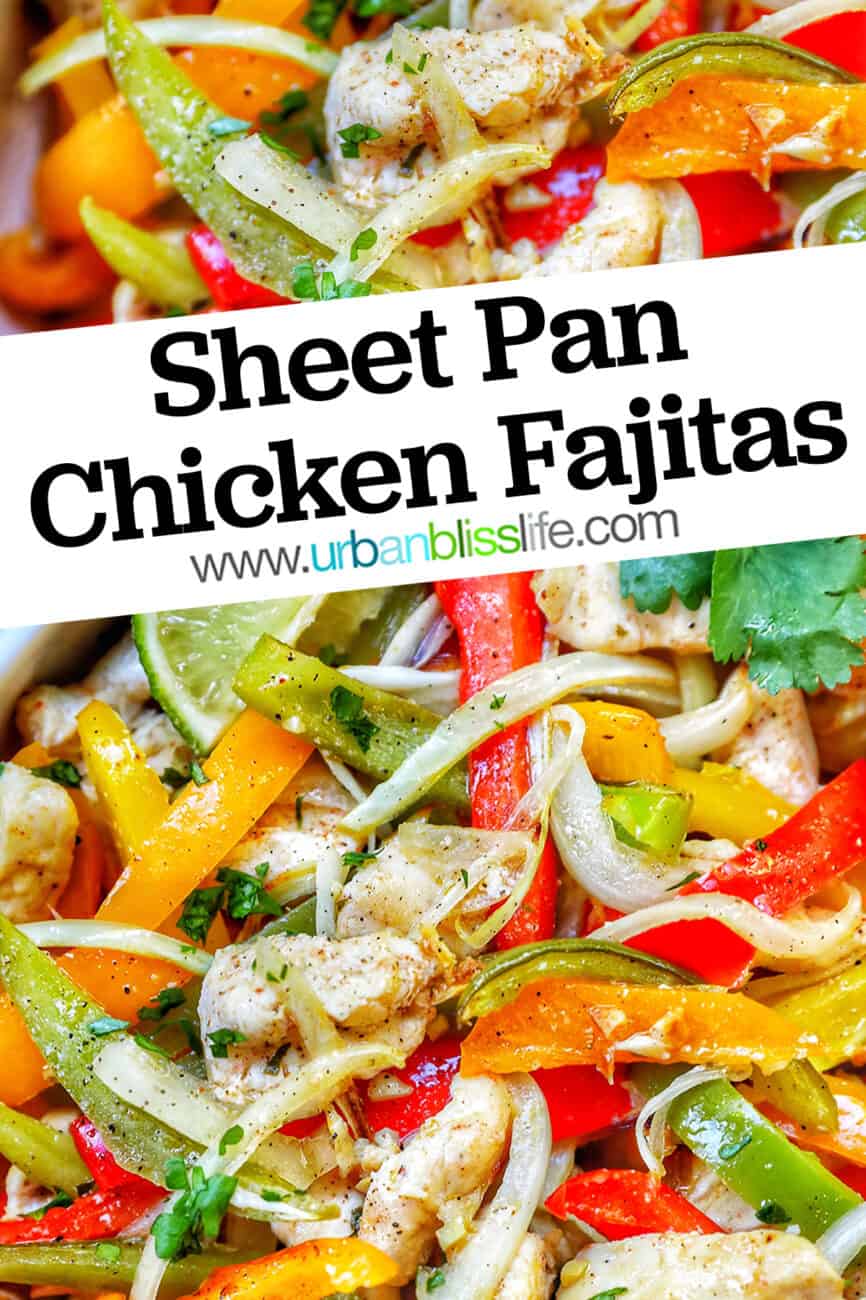 These Sheet Pan Chicken Fajitas are a delicious, easy, one-pan meal the whole family will love!

Sheet pan meals are AWESOME. They're super easy to whip up and your protein and veggies all cook together on one pan. That means less hands-on cooking time, and fewer dishes!

These Sheet Pan Chicken Fajitas are great to make when we want something healthy AND hearty!

If you've never had fajitas before, they are a Tex-Mex creation that's hot, flavorful, and downright festive! They're usually made and served in cast iron pans, making them sizzling hot when served tableside.

To simplify things but keep the flavor, the same ingredients are used in this recipe. But instead of cooking them on the stovetop, they're baked in the oven. This means less hands-on cooking time for you!

Fajitas can be made with under 10 ingredients!

Traditionally, fajita recipes call for steak, chicken, or shrimp as the protein. This recipe calls for chicken breasts cut into small bite-size pieces.

In addition to chicken, you'll need:

Exact measurements and detailed instructions can be found in the printable recipe card at the bottom of this post!

How do you make chicken fajitas?

It's SO EASY to make these yummy fajitas!

Exact measurements and detailed instructions can be found in the printable recipe card at the bottom of this post!

How do you serve fajitas?

The classic way to serve these delicious bits of well seasoned chicken and veggies is with some tortilla rounds. But there are so many ways to enjoy chicken fajitas!

What do you serve with chicken fajitas?

Chicken fajitas are delicious with any of the following side dishes:

What wine goes with chicken fajitas?

This 2019 Marlborough Villa Maria Sauvignon Blanc is sold worldwide and found widely in the United States for under $15.

Some additional ideas and cooking tips for cooking chicken fajitas: 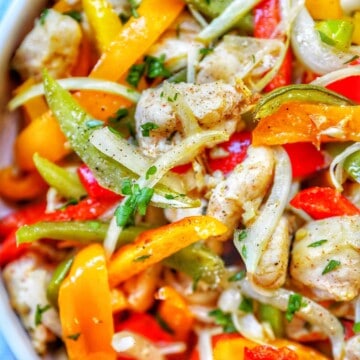