Not all travel tours are alike. Read what made the Acropolis tour with Greeking.me so special. 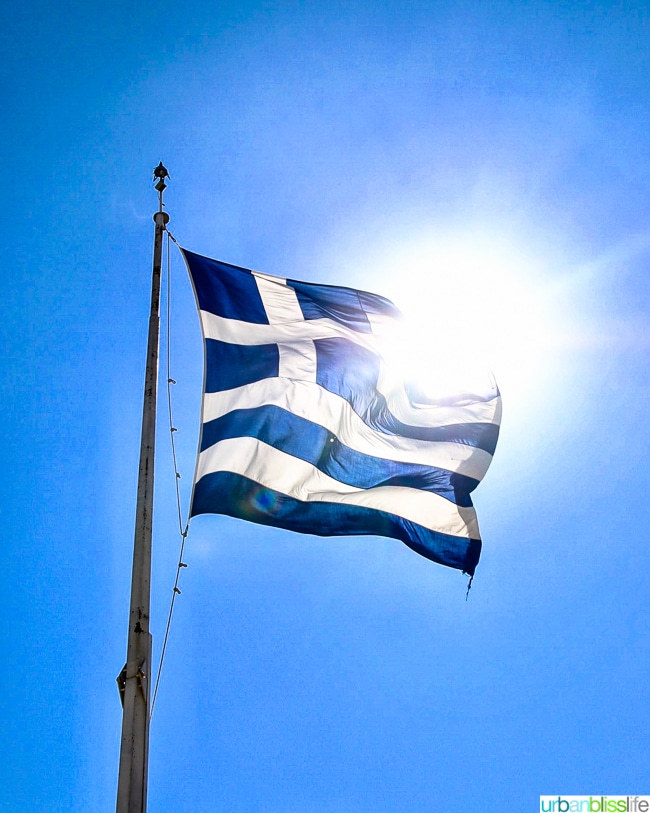 Just a few hours after I landed and rest my head on my oh so comfortable bed at Hilton Athens, it was time to wake up and meet the rest of the media group for our morning tour.

I was still running on adrenaline from my action-packed, long layover in London, and ready to see Athens! First stop: the historical Acropolis.

If you've never been to the Acropolis of Athens, here are some fast facts you should know: 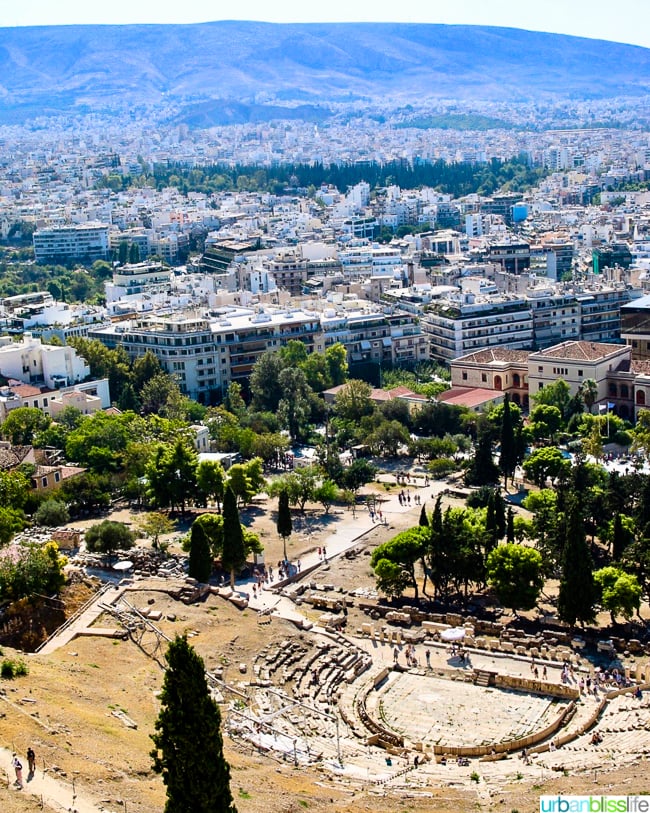 We met our Greeking.me tour guide, Eva, at the southeast entrance. This is near the metro station, and was almost empty when we arrived. If you haven't purchased a ticket in advance or you are not meeting a guide who has purchased tickets for you, you will likely need to enter through the main entrance on the west side.

Travel Tip: if you're not parking, purchase tickets in advance or sign up with a guided tour that includes pre-purchased tickets, and use the southeast entrance to avoid long lines getting into the Acropolis. 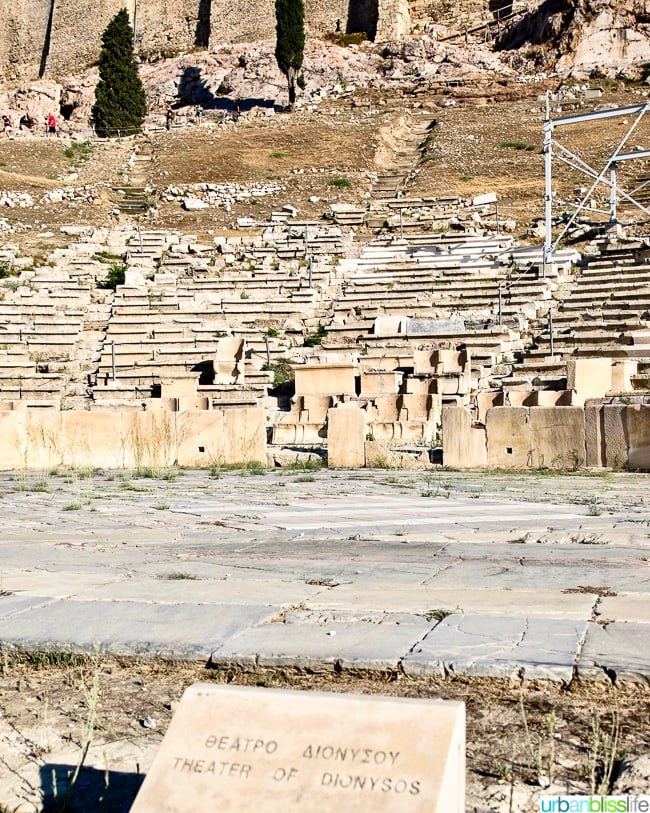 Upon walking through the southeast entrance, the first visual feast that fed our eager, knowledge-hungry eyes was the ancient Theatre of Dionysus. 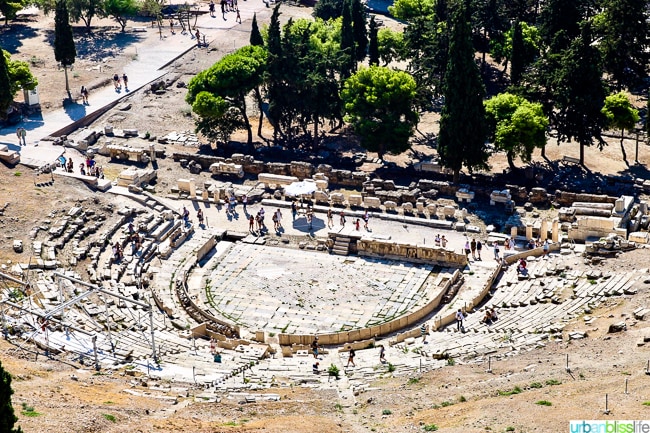 The Theatre of Dionysus is said to be the world's first theatre and the birthplace of the Greek tragedy. The historical significance and power of this place hit me hard as we walked along the curves of the current remaining structure.

Our guide Eva, an archaeologist with a love of Greek mythology and a true talent for storytelling, intertwined fantastic tales of the birth of Dionysus and stories of the Gods with historical perspective on the structure itself. 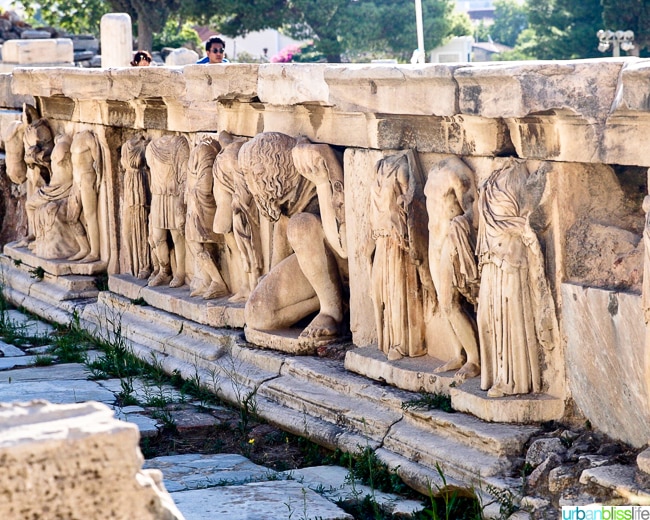 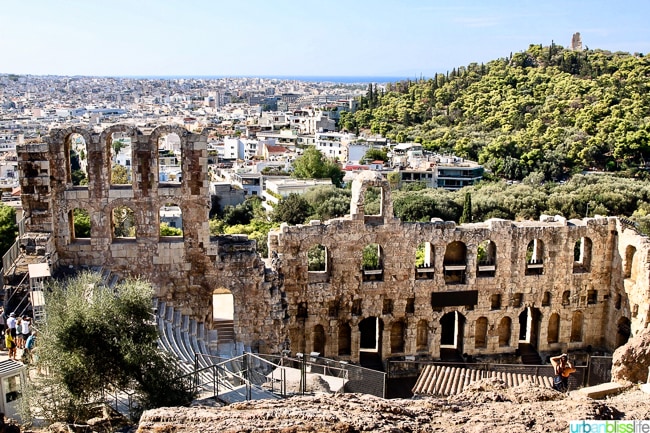 Walking further up the Acropolis, we came across the stunning Theatre of Herodes Atticus. Originally completed in 161 AD, this structure was restored in 1950 and has since become what must be one of the coolest open air theaters in the world. Standing there, where ancient Greeks once stood, I found it impossible to imagine watching Madonna or Foo Fighters in concert there. Our stadiums in the US get trashed during concerts; how they manage to preserve such a historical structure during massive concerts still to this day bogles the mind.

As we walked past the Theatre of Herodes Atticus, we neared the main entrance on the west side of the Acropolis.

Ahh, there are the people. We had only encountered a few dozen other tourists and a few other tour groups up until this point. But by the main entrance, the crowds were gathered.

We joined the masses shuffling up the stairs and through the Propylaea, the monumental gateway to the Acropolis. This is where you should allot some time to go through, as it takes a while for the crowds to get to the top. 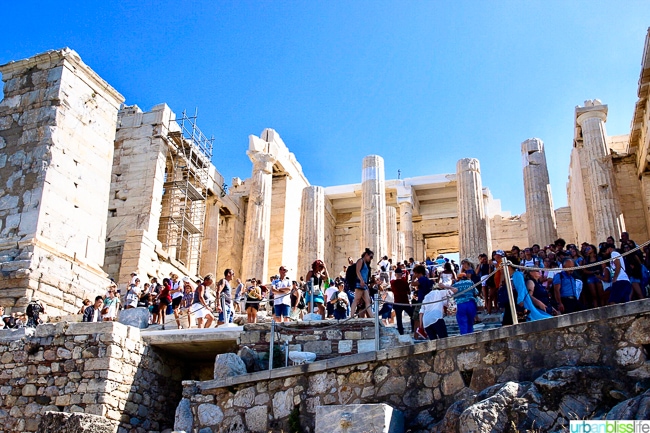 Travel Tip: wear comfortable shoes with a decent grip (not your pretty pointy-toed flats) and watch your step going up the stairs through the Propylaea. Not only are the steps uneven, as you would imagine they would be, but the stone can be quite slippery. I think each of us in our group lost footing and/or had a little near slip at least once going up or down this area. 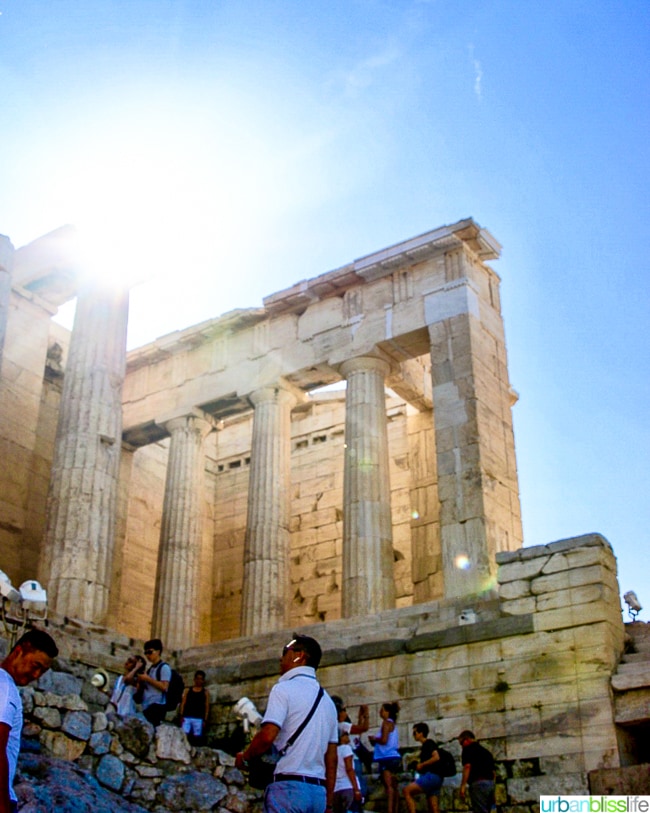 As you walk through the Propylaea, you'll see the Temple Athena Nike to the right. 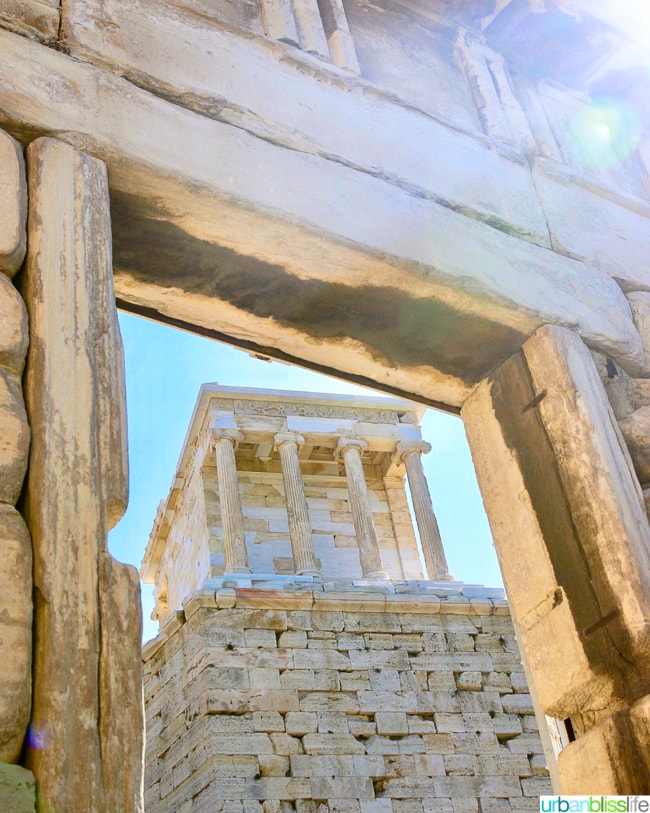 The Greeks loved Athena in this form, as the winged goddess of Victory. The temple was destroyed by the Persians in 480 BC, then rebuilt; it was again destroyed in 1686, this time by the Turks, and again rebuilt. The temple is usually closed to visitors, but it's a beautiful sight to behold as you make your way up the Acropolis to the Parthenon. 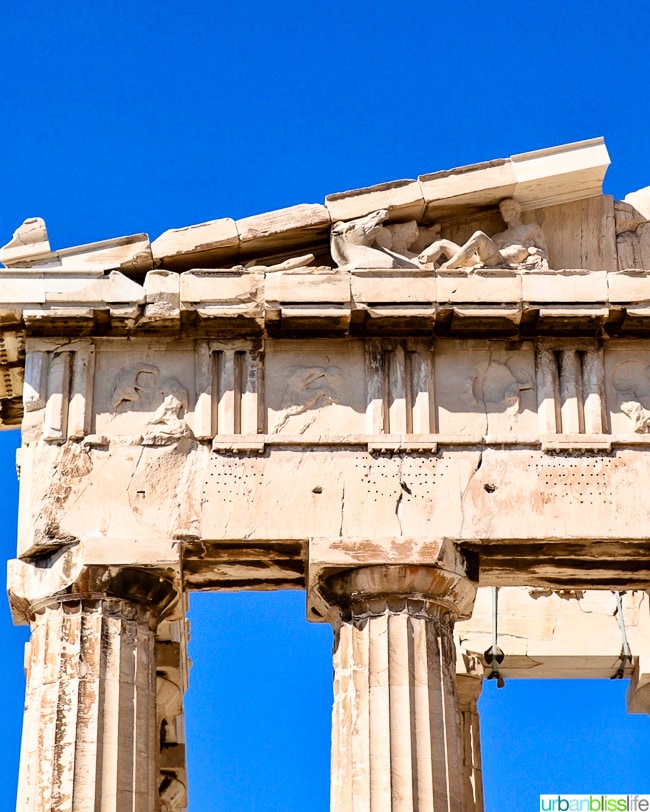 At the top of the Acropolis stands The Parthenon. Dedicated to the Goddess Athena, this massive structure was built in 438 BC. 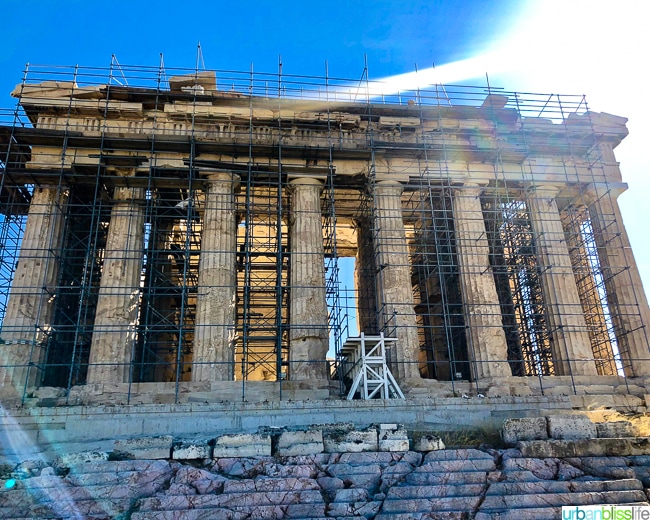 This is the first view you get of the Parthenon: a majestic symbol covered in scaffolding. Reconstruction and restoration continues, which you can imagine, is a massive and delicate undertaking. 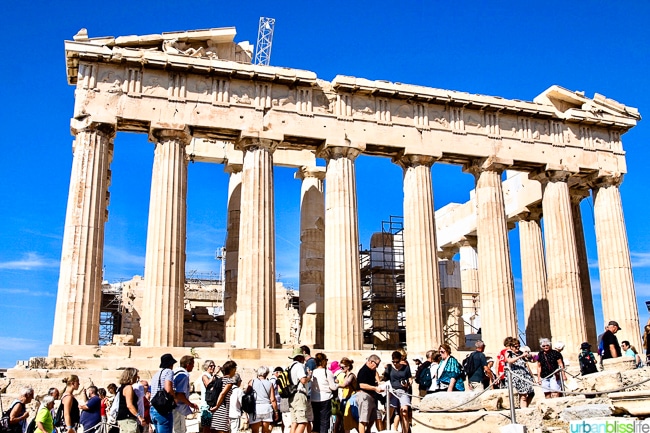 Rounding the back, you can see the Parthenon side that is not covered in scaffolding (at least, as of fall 2018 it was not). Regarded as the enduring symbol of Ancient Greece, the intricate decorations of the Parthenon are important classic Doric order features and examples of Ionic architecture. 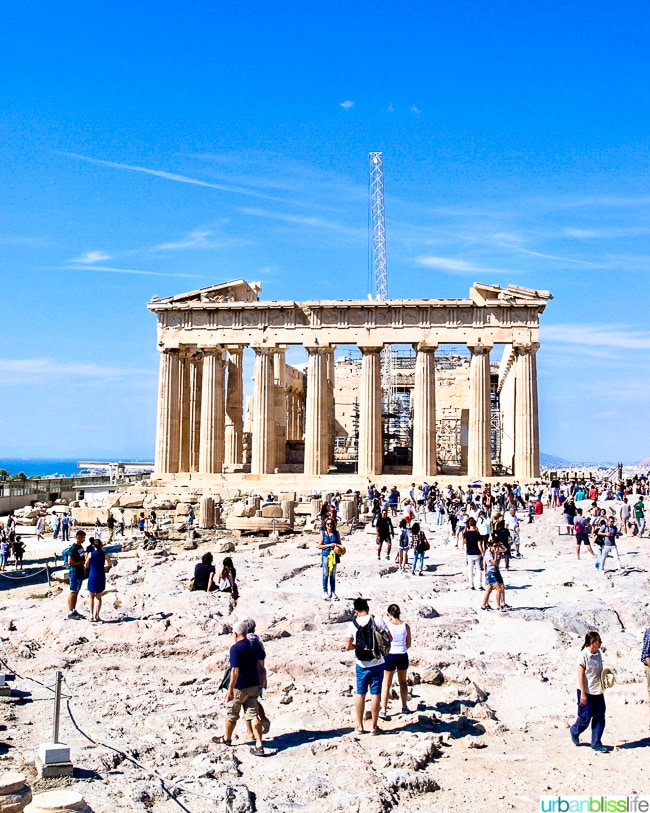 The Parthenon is a glorious structure to behold. If you have an excellent tour guide, as we did, you'll have the chance to dissect the architecture, conflicted history, and fascinating mythology surrounding the Parthenon while walking around it.

Travel Tip: It can get very hot at the top of the Acropolis, so be sure to wear and carry sunscreen with you! 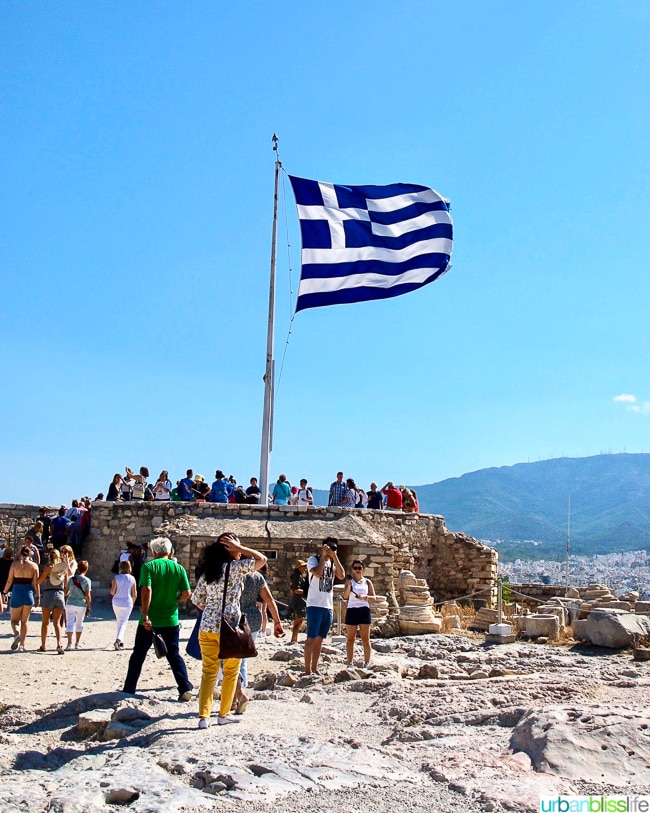 There is also a lookout point at the top of the Acropolis, just past the Parthenon, as well as the Acropolis Museum. The vast, open space at the top is a great place to rest a bit before heading back down.

Athena and Poseidon, daughter and son of Zeus, both wanted control of the area that became Athens. Zeus wanted to know what both would provide if they were to gain control of the land. At the top of the Acropolis, Poseidon struck the rock with his trident. Athena, on the other hand, produced olive tree, claiming it would provide sustenance to its people. Athena was declared the victor, and indeed, the olive tree has proven to be vital to the economy and life in Athens.

According to Greek mythology as told by Eva, the Erechtheion is where you can see both results of this contest. 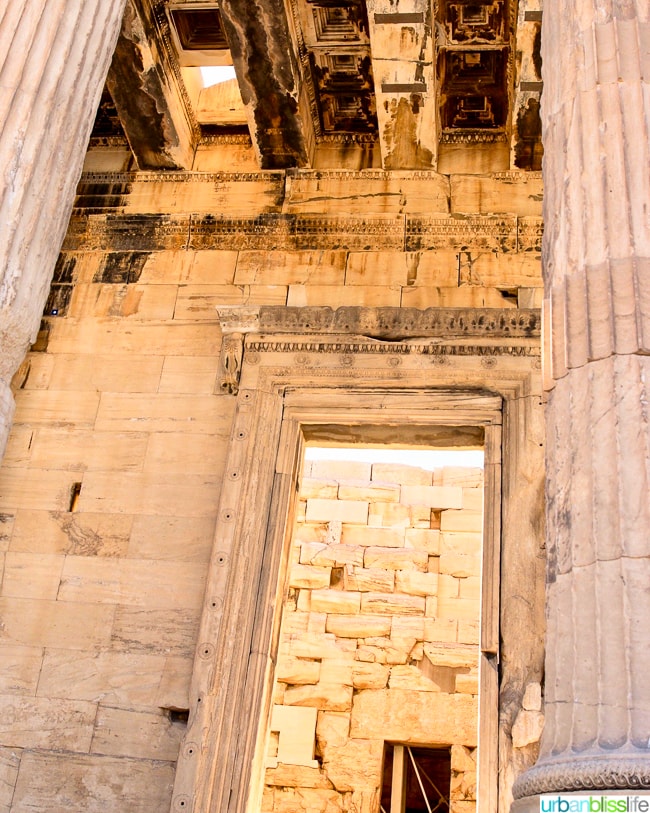 See that blast through the ceiling in the top left corner of the above photo? That is reportedly where Poseidon threw down his trident. 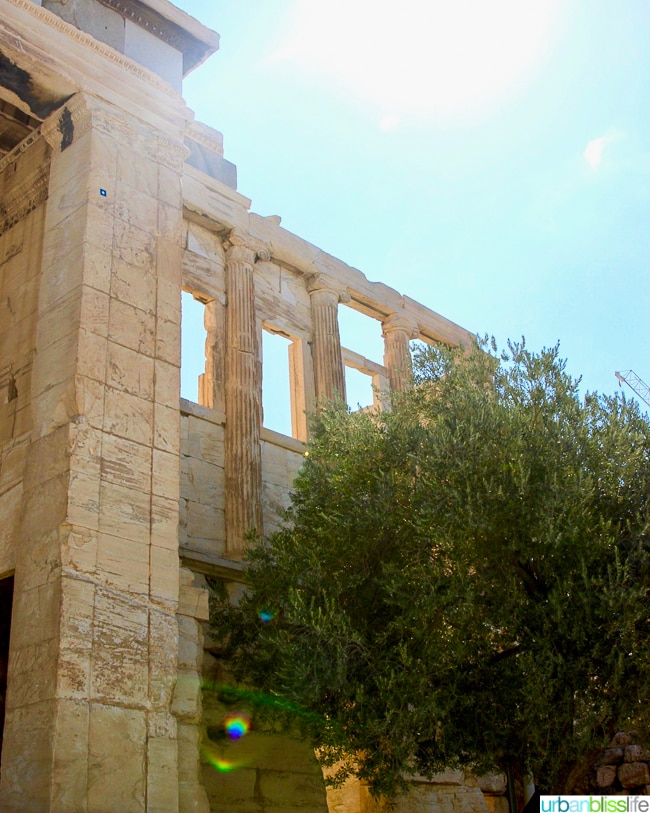 On the side of the temple, is reportedly the olive tree that Athena had produced. 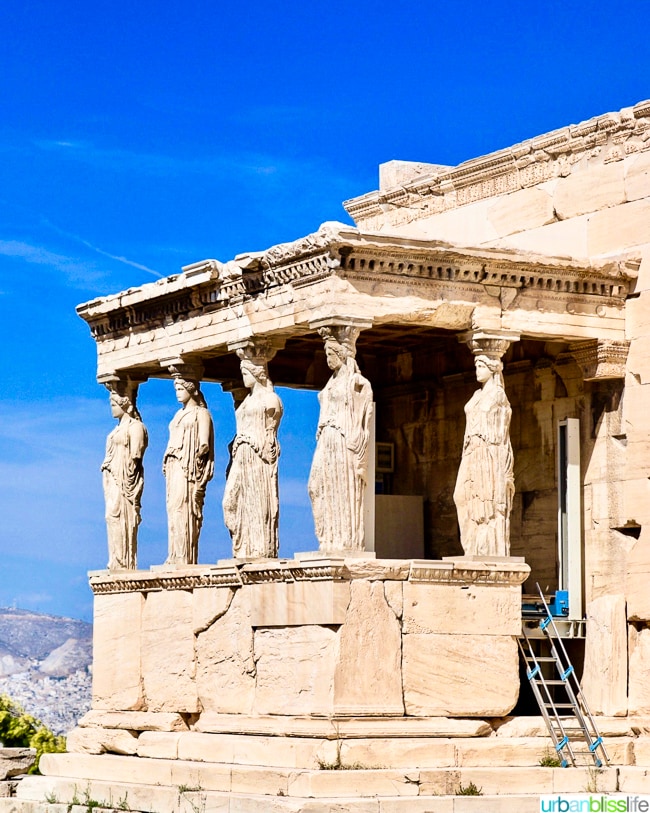 On the side of the Erechtheion stand six tall female figures. Known as the Caryatid Porch of the Erechtheion, the current ones you'll see when visiting the Acropolis are copies. Five of the original figures are in the Acropolis Museum of Athens; one was removed by Lord Elgin in the early 19th century, is now in the British Museum in London.

Throughout your trek up the Acropolis, you are treated to amazing views of this historic city. 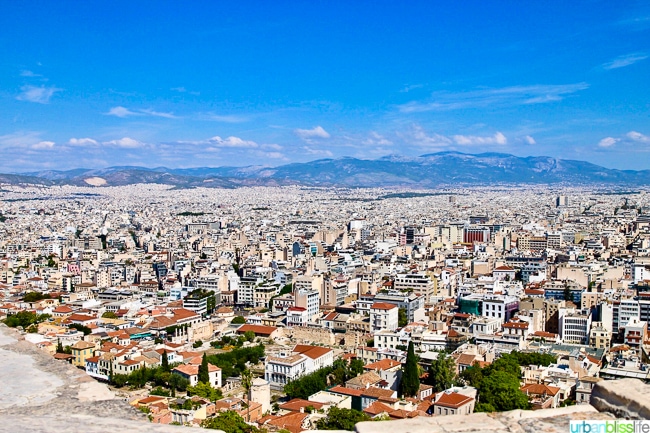 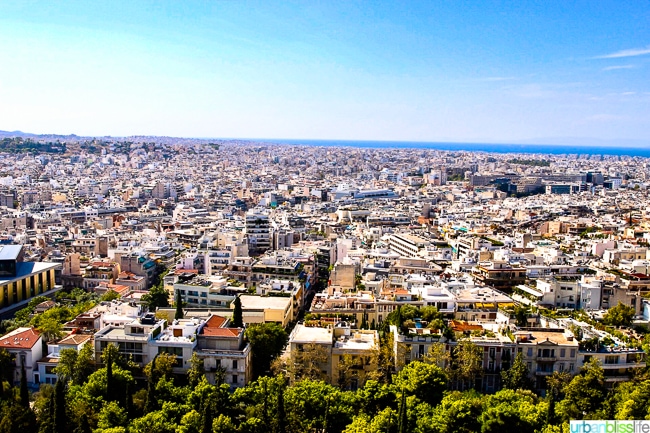 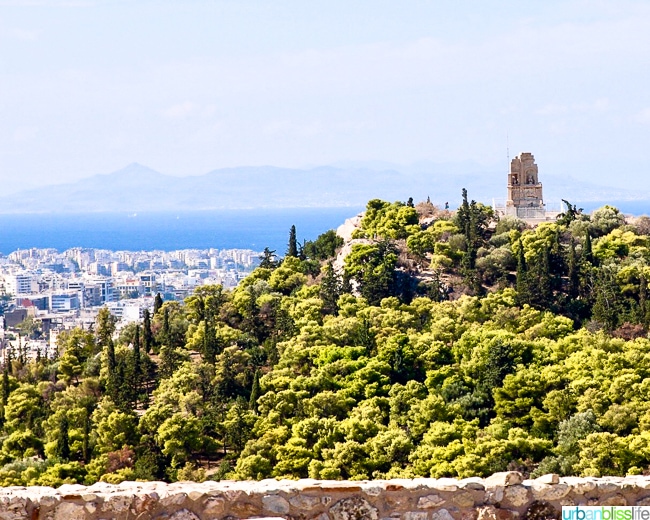 Why You Should Take an Acroplis Tour with Greeking.me

When visiting Athens, you could explore the Acropolis on your own. It's what I probably would have done had I not traveled here on a press trip. However, after my experience, I honestly highly recommend booking an Acropolis Tour with Greeking.me. It was an incredible experience and I doubt exploring the Acropolis on my own would have yielded the same happy results.

The Acropolis of Athens is hard to miss, but here's the official address: 105 58, Greece.

Have you been to the Acropolis of Athens? If so, what was your favorite part? If not, what most interests you about this historical site?

Disclosure: I received a complimentary Acropolis tour as part of a press trip. All opinions and photos are, as always, my own. I absolutely LOVED our tour of the Acropolis, and think you will, too!