They're the sweet special bites that my family doesn't dare indulge in on a regular basis, but we love to enjoy together as once-in-a-while weekend breakfast treats!

And donuts, believe it or not, are SO easy to make at home! My kids love when we break out the donut pan and spend a Sunday morning baking up these bad boys.

While I love making my healthier (but still SUPER tasty!) Paleo, Dairy-Free, Gluten-Free donuts, sometimes a girl's just gotta have A REAL DONUT. Ya know? Enter my Cinnamon Sugar Donuts!

This recipe is baked versus fried, so it's a little healthier than most donut recipes.

If you're looking for an AMAZINGLY DELICIOUS, crowd pleasing donut recipe to treat your friends and family - this is IT!

This donut recipe is super simple.

I've adapted an old Food Network recipe, tweaked it over the years, and this is the recipe my family loves, loves, LOVES.

If you don't yet own a donut pan or two, I highly recommend getting one. They're usually just around $10-15 each, and they last forever.

A good cooling rack and wax paper (to catch glaze drips) are also must-haves - not just for this recipe, but for baking in general.

If you have kids, they can help you:

And of course, you will have no problem getting your kids to help you EAT these beautiful donuts!

For these cinnamon sugar donuts, I'm including three different toppings/glazes you can make.

There's the classic Cinnamon Sugar Glaze. This is my son's favorite!

The Classic Chocolate Glaze is my daughter's favorite.

Then there's my absolute favorite: Classic Vanilla Glaze. made with confectioner's sugar (powdered sugar) and butter, this elevates the bare cinnamon sugar donut to a whole new extra special level.

If you're looking for a very special weekend or holiday breakfast or brunch, this Baked Cinnamon Sugar Donuts recipe is for you.

I hope you love it as much as we do! 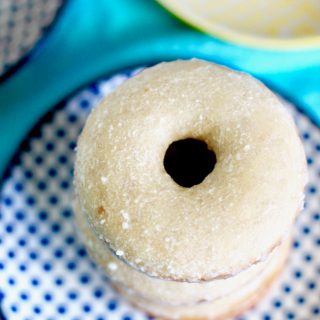 Makes about 12 standard size donuts. *I prefer using almond milk, but you can use 2% or whole milk
Tried this recipe?Mention @UrbanBlissLife or tag #UrbanBlissLife!

What glaze/topping would you like to use with these donuts?