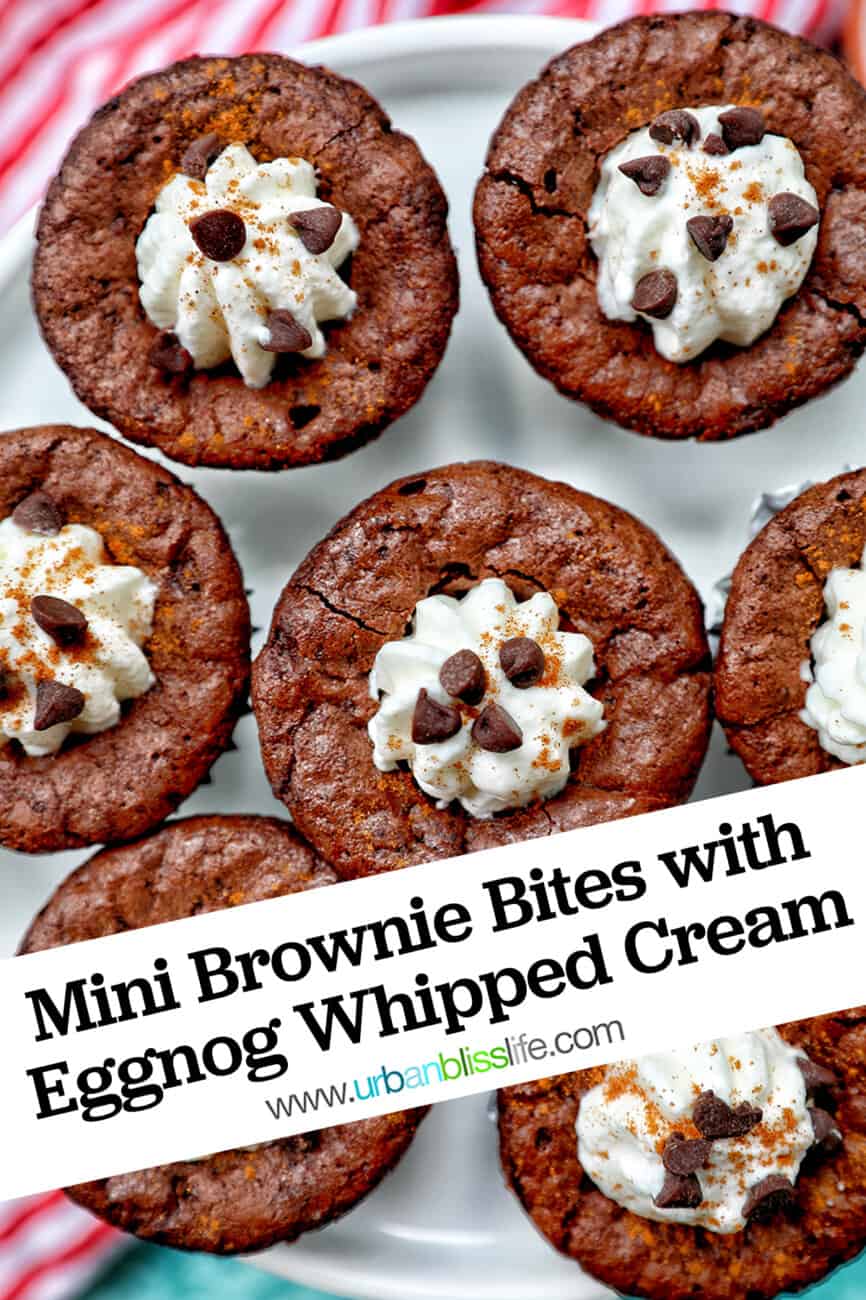 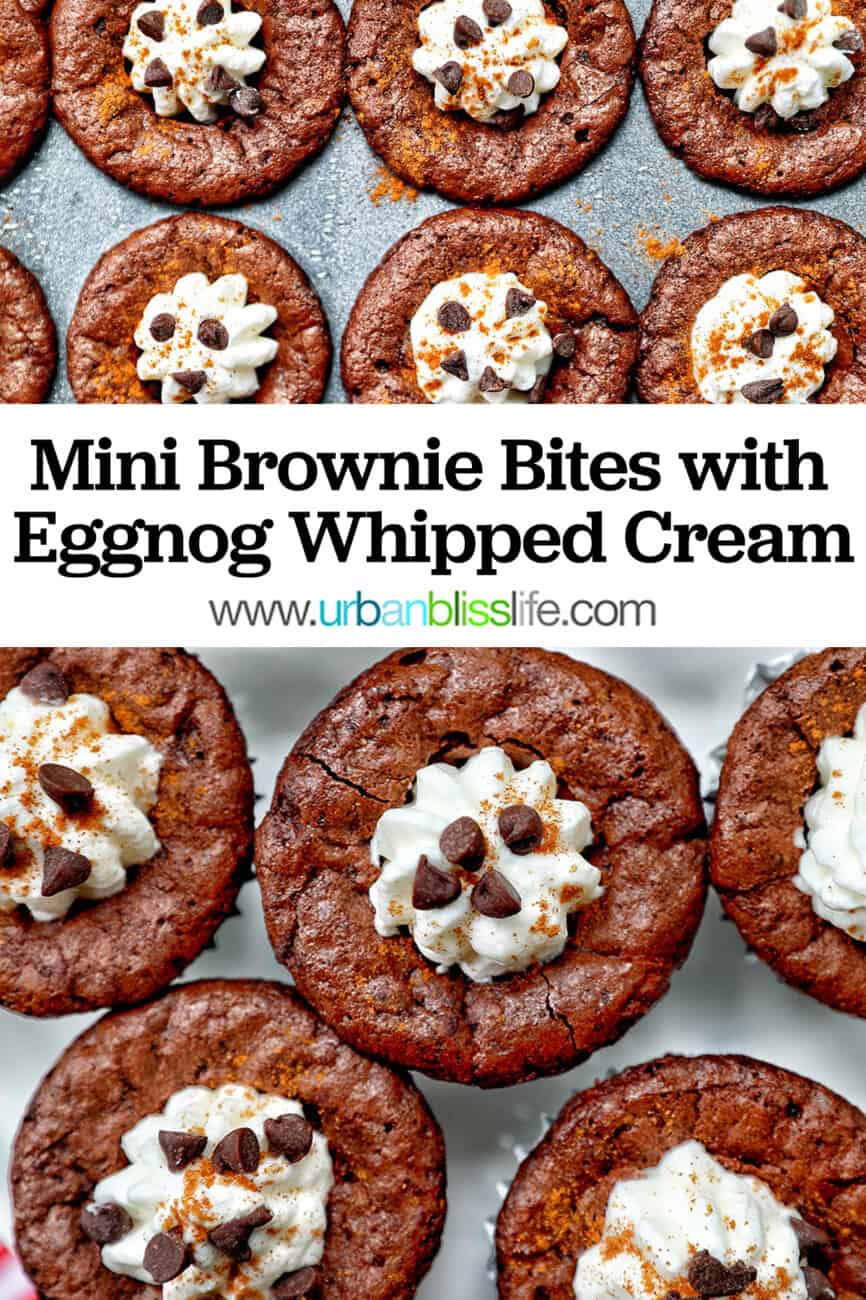 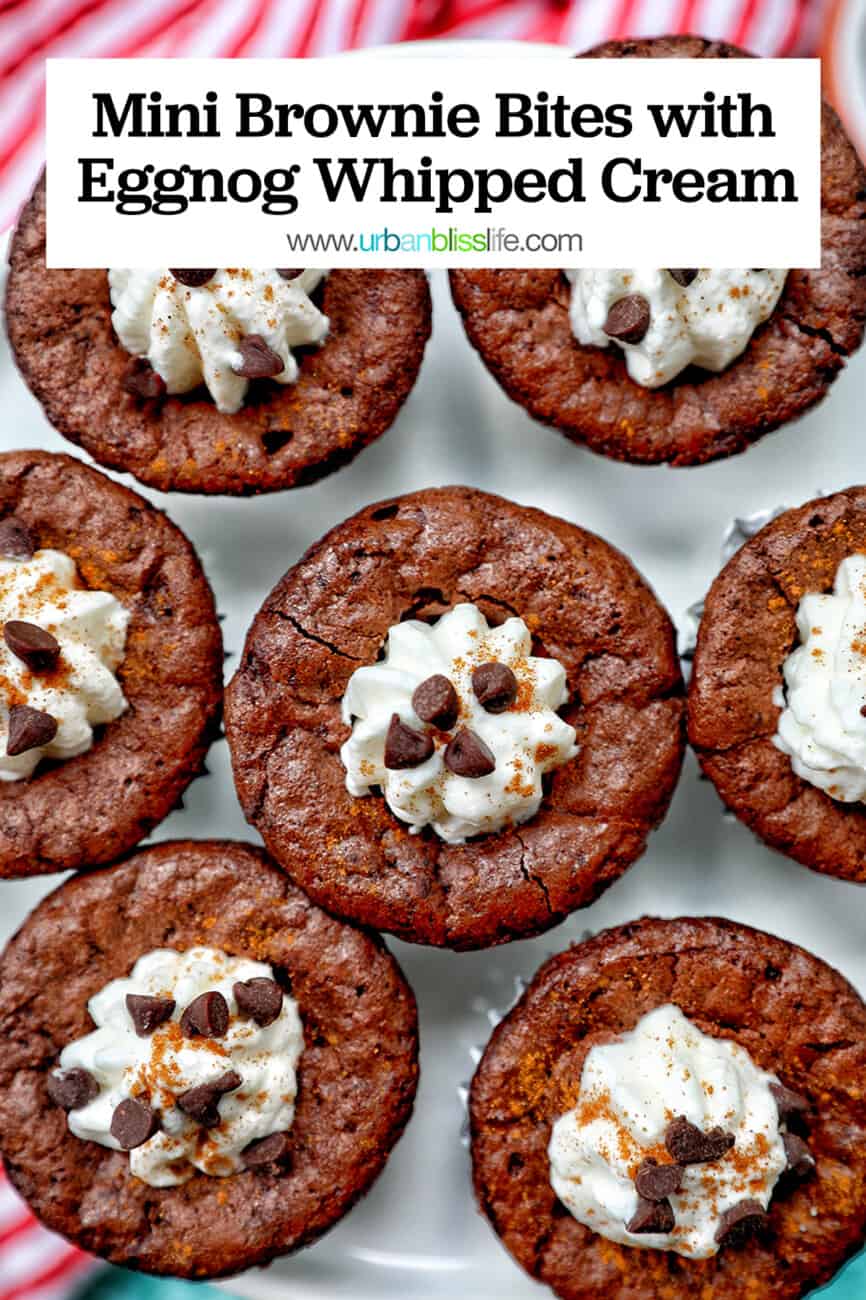 These Mini Brownie Bites with Eggnog Whipped Cream are great for fall and winter gatherings! They're so adorable and portable! Take a batch to your next party, and keep a batch for yourself ;)

I often see it as a challenge to cook or bake with ingredients that I don't necessarily LOVE. While I'm not anti-eggnog, I've never been PRO eggnog, either.

As eggnog season approached, I was determined to figure out ways to cook and bake delicious dishes using this festive fall/winter beverage. I kept circling back to the same question: can you whip eggnog, like whipped cream?

I experimented and discovered the answer: YES! With a little help from some supporting ingredients, that is.

Then I decided eggnog whipped cream on its own wasn't enough. Oh, no. It needed a friend. An accompanying treat that I could also infuse more eggnog into.

So I baked up a batch of cute little mini brownie bites and replaced the typical water with some eggnog.

I'm pretty proud of these Mini Brownie Bites with Eggnog Whipped Cream, and I think you'll love them, too!

These desserts are perfect for fall and winter, and especially for holiday parties. They're bite-size and you can eat them just using your fingers - no utensils required. Perfect for passing around at parties or adorning a dessert table. They're topped with cinnamon and mini chips, adding another layer of flavor. Also, they will make your house smell AMAZING while they bake!

To make these delectable fall and winter desserts, you'll need:

Mixer - you can either use a stand mixer, or a large mixing bowl with hand mixer, to stir together both the brownie mix and the eggnog whipped cream.

Pastry bag and decorating tip - I use a large closed star tip to deceorate.

You only need a few ingredients to make these amazing desserts!

Ingredients for the mini brownie bites

Brownie Mix - while you can totally use your favorite homemade brownie recipe, this recipe calls for brownie mix. Keeps it fast and easy!

Butter - You'll want to melt the unsalted butter in the microwave and let it cool a bit before adding it to the brownie mix.

Eggnog - Use regular eggnog or do what I do: bump up the flavor with a vanilla cinnamon eggnog! (more details on this product below)

Ingredients for the eggnog whipped cream

Heavy cream - to make eggnog flavored whipped cream, you need the heavy cream to bring up the fat content in order for the liquid to whip into stiff peaks.

How to Make Mini Brownie Bites

Start by preheating the oven to 325°F for nonstick pans or darker pans (350°F for light-colored muffin pans). Spray a 24-cup mini muffin pan with nonstick cooking spray, or use mini cupcake liners to line each cup; set aside.

In a large mixing bowl, add the brownie mix.

Then using a hand mixer (or in a stand mixer), combine the brownie mix, melted butter, and eggnog.

Beat the eggs in one at a time. Mix until fully combined.

Using a spoon, small ice cream scoop, or melon baller, scoop about one tablespoonful of batter into each of the mini muffin pan cups.

Bake at 325°F for 25 to 30 minutes, just until a toothpick inserted into the center of a brownie cup comes out somewhat clean. The brownies will continue to bake for a few minutes out of the oven, so if the toothpick is squeaky clean, the brownies may be too hard once they've settled. If the toothpick has too much wet brownie batter on it, then it's not baked enough.

Once the brownies are done baking, remove them from the oven and use the bottom of a large wooden spoon or an ice cream scoop (as seen in the photo above) to gently push down the center of each mini brownie bite. Take care NOT to push all the way through the bottom - just until about the middle.

Allow the brownie bites to cool in the pan or on a wire rack.

While the brownies are cooling, make the eggnog whipped cream

In a stand mixer or a large chilled bowl using a hand mixer, briskly beat together the heavy whipping cream, eggnog, and confectioner's sugar for several minutes until stiff peaks form.

What's the best way to store these brownies?

The best way is to store the brownies and whipped topping separately, each in their own airtight containers. Then pipe the topping into the mini brownies just before you're ready to serve.

Can I use homemade brownie mix?

What's the best way to make sure my brownies don't stick to the pan? 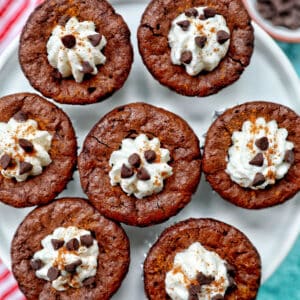 For the mini brownie bites

For the eggnog whipped cream

Brownie texture: If you like more cake-y brownies, let them bake towards the mid or end of the baking range in the recipe. If you like your brownies more moist, bake them for less time, around 24-25 minutes in this case.
Tried this recipe?Please leave a star rating and comment! Then snap a pic of your dish and share it on social media. Tag @UrbanBlissLife and #UrbanBlissLife!