Recently, I have spilled my guts to you lovely people about my current love affair with cider. I'm excited to share another Oregon Cider Week event: the release of the first two ciders from brand new Alter Ego Cider.

I had the pleasure of attending the release party this week at Coopers Hall, a new winery and taproom in SE Portland. I'll share more about Coopers Hall at the end of this post. First, let's take a look at the newest local company to join the bourgeoning cider scene.

Alter Ego Cider is brand new, and was conceived and launched this year. The company is a collaboration between Anne Hubath of Helioterra Wines, Whoa Nelly Wines, and Guild Winemakers (she's one busy winemaker, folks!) and winemakers/cider producers Nate Wall and Kris Wall.

Nate is an experienced winemaker. But he also been producing cider for three years for one of the Northwest's largest cider producers. The release event happened to coincide with the Walls' daughter's second birthday. I thought that just made this event all the more awesome and heartwarming; you know how much I love and support local family businesses! 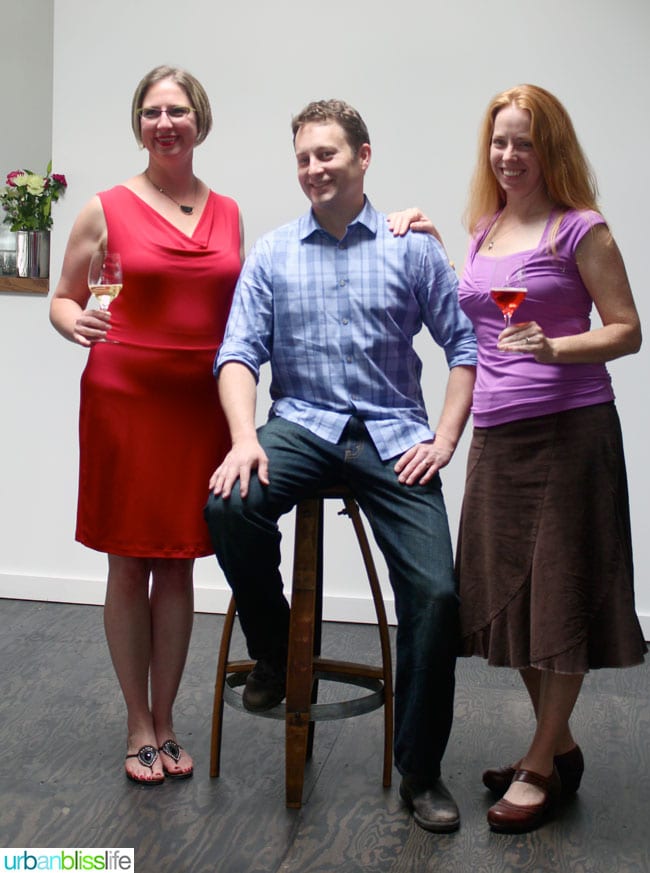 Alter Ego Ciders is small batch production cider. It has the nuance and depth of winemaking, thanks to it being the brainchild of experienced winemakers.

They have two main ciders. The Brute is a classic cider made from seven different varieties of Pacific Northwest apples. The second is their seasonal cider, which is a raspberry cider.

The Brute and the Seasonal Cider

The Brute was hands down my favorite, and after my informal questioning of attendees, it appeared to be the crowd favorite as well. It's light, crisp but not biting - a simply smooth cider that you can imagine sipping on the patio during the dog days of summer reading your favorite novel (or, in my case, Cooking Light magazine).

I expected the raspberry cider to have the traditional sweetness that berry ciders and beers tend to have. But I was pleasantly surprised to find that it wasn't too sweet. I don't traditionally go for berry ciders or beers because I find them too sweet. This was a lighter balanced berry cider.

You can find Alter Ego Ciders at Coopers Hall in SE Portland. It is available by the glass and also in kegs, so you can pick some up for your next summer soiree!  The ciders will be bottled by the end of this year for greater distribution.

Now onto Coopers Hall, a winery and taproom that opened in late April of this year. It is 8,000 square feet of awesomeness.

I want to move in. Do you think they'll let me?

After tasting the Alter Ego Ciders in the upstairs loft of Coopers Hall, my friend H and I decided to go down to enjoy some dinner in the main dining area of Coopers Hall.

The wine list is extensive, and Coopers Hall has excellent beer and cider on tap as well. In fact, I liked the Alter Ego Cider so much, that I ordered a full glass of it with dinner.

The Menu at Coopers Hall

And then, there's this: the Coopers Hall burger.

THE. BURGER. OF. ALL. BURGERS.

My pal H declared that it may be the best burger she's had. We may have told the server as much at least six times. Maybe seven.

The Coopers Hall burger is made with Alicante-braised onions, lettuce, tomato, Muenster, aioli, on a poppy seed bun for $10. For $2 more, you can add bacon.

I love my friends. They love bacon as much if not more than I do.

And the Alicante wine-braised onions is what really makes this burger: they are tender, sweet, and so flavorful. Try the burger next time you are at Coopers Hall, and then come back and leave a comment with your thoughts. I'd love to know what you think!

It's a gorgeous happy place, my friends. And, you can get 750ml wines to go.

The Alter Ego Ciders release event was part of the Northwest Cider Association's third annual Oregon Cider Week. From June 20 through June 29, cider tasting events and special menus featuring Northwest ciders are taking over the city. You can read my recap of St Honore Boulangerie's special cider cocktails and cider pastries, and get the full line-up of Oregon Cider Week events online.