Over the years, I've test driven a lot of vehicles for Urban Bliss Life. None have produced such a strong emotional reaction from me and my family as the GMC Acadia.

First, you should know I have never been a fan of GMC vehicles. In my personal opinion and experience, they tend to be oversized clunky beasts that feel a bit too unstable and toy-like for me.

Second, you should know that the term "crossover" seems to have crossed over into full-size sports utility vehicle status. The"crossover" I'm reviewing today is much, much larger than my Honda Pilot, which is considered an SUV.

It was the hardest test drive vehicle I have ever had to give back. My daughter and I still mention it wistfully on drives sometimes.

The 2014 GMC Acadia starts with an MSRP of $34,485, which I find to be fairly mid-range when we're comparing similar vehicles.

The exterior is sleek, bold, and honestly, looks much more stylish than the typical GMC design. The exterior is also quite deceiving: the interior is far larger than it would appear to be by exterior glances.

I test drove the Acadia for one week, pushing it to its limits in the city (where it was far easier to park than I anticipated) . . .

The Acadia reportedly gets 17 MPG in the city and 24 on the highway, which I found to be fairly accurate, and similar to my SUV.

It drives smoothly and easily over all terrains. For a larger vehicle, I felt it had quick pick-up from stops, turned corners nicely around the mountains, and drove wonderfully on our steep hills.

The particular 2014 GMC Acadia that I test drove had middle row bucket seats, allowing for easy access to the third row, and providing seating for seven people comfortably. As a mom, I LOVED this option. When we're stopped at rest stops on road trips or carpooling kids, having the middle-through section open is so nice and convenient. It's quick and easy to hop from front to back without getting out of the car, which is important when you live in a rainy climate like Portland, Oregon.

My two kids loved that they could either sit far away from the adults in the back without feeling like they were sitting on top of each other, or as you can see here, they could each have their own space by sitting in different rows. There was ample legroom in all rows.

You can also opt for the Smart Slide Seating System, which offers seating for eight people by creating a three-person middle row seat instead of the open bucket seats as pictured here.

As a mom, I'm often shuttling around my own children plus their friends. Add to these bodies my business gear and travel gear, their sports gear and backpacks, and groceries galore, and you're looking at a mighty high storage space requirement. We're in our car a lot, and it's easy to feel cramped even on short trips.

One nifty storage compartment option I enjoyed was the 3-2-1 system between the two front seats. The bottom is a large compartment that can hold  bigger items such as the backseat wireless headsets. The middle compartment rests on top and can hold receipts, pens, lotion, garage door openers, etc. Then the top slides over, completely enclosing the storage areas so you can have a flat surface for that breakfast sandwich you grabbed on the way to work.

As I mentioned earlier, the exterior of the 2014 GMC Acadia is quite deceptive: you think it must have a somewhat cramped interior to seat seven -- but it does not. You would think it would then compromise on trunk space to accommodate for the roomy seven seats -- but again, it does not.

We were able to pack in our family's luggage for a weekend getaway in the trunk space (we even added a rolling luggage to the items you see pictured here, and everything still fit in the trunk).

We were also able to fit all of the groceries from a trip to Costco, our local bulk goods store -- with lots of room still to spare! 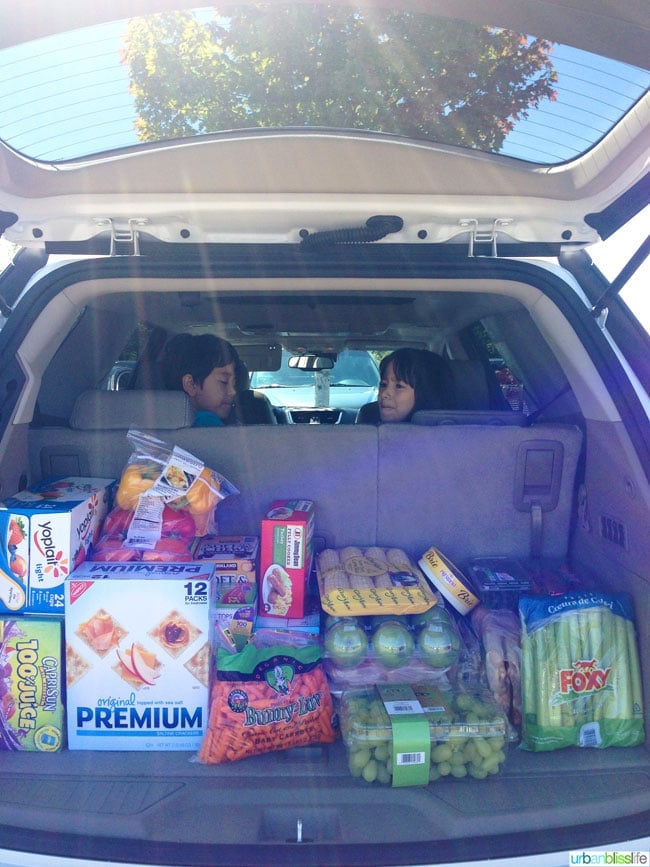 As with most crossover vehicles and SUVs, the 2014 GMC Acadia has a drop down monitor and DVD player, which comes with two wireless headsets.

The middle seat can easily control the DVD player and radio for the rear section. I also love the audio jacks and the power outlet and USB charging stations built into the middle console. This makes long road trips so much easier! We never have to worry about our phones running out of battery. 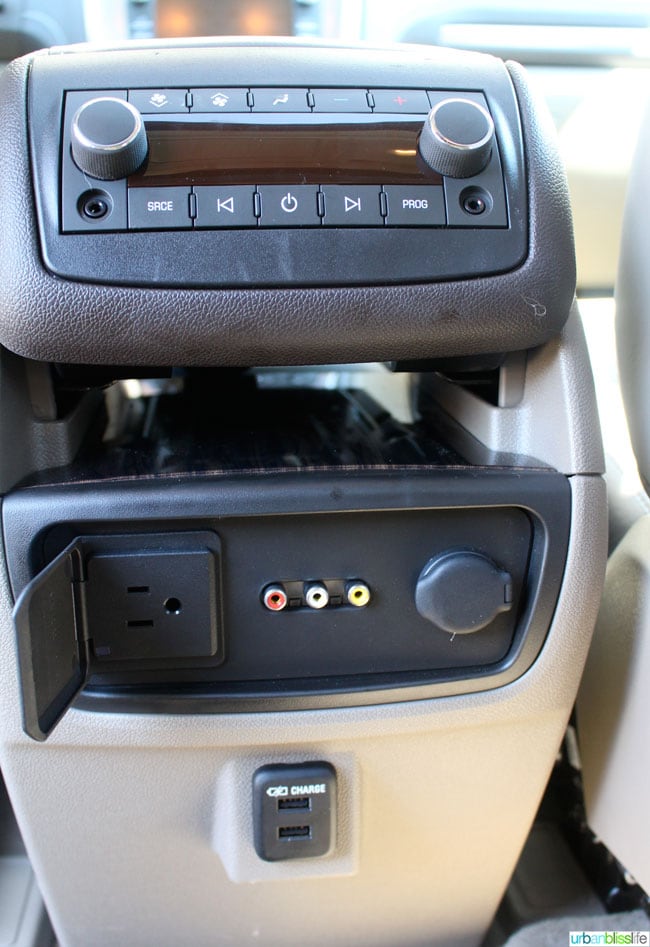 The 2014 GMC Acadia has a keyless entry and also an automatic trunk door open/close capability, which came in handy almost every day for us, whether to make it easier to load in groceries or sports gear. 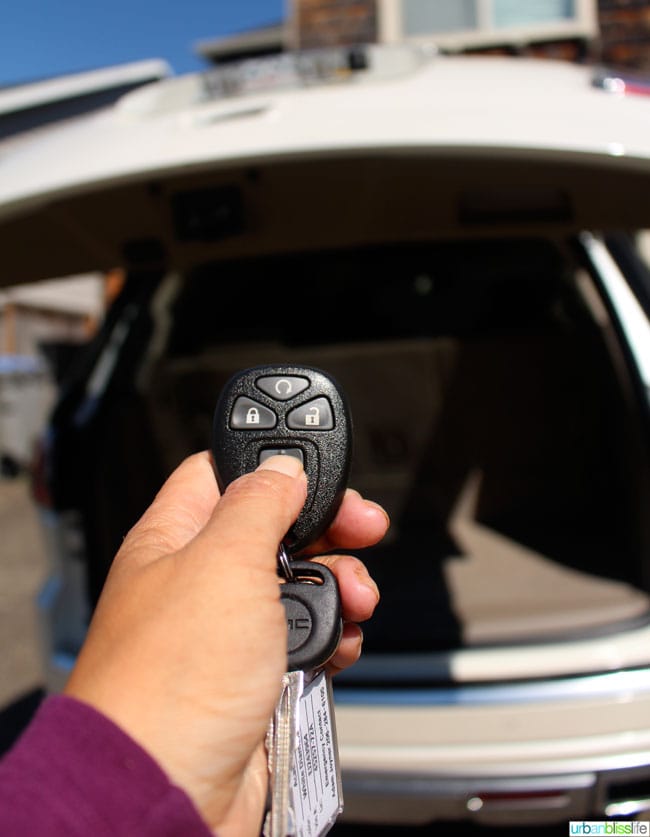 The 2014 GMC Acadia is an excellent car for families with one to five children, and pets. Its roomy interior and sleek exterior make it a fabulous alternative to the bulkier, less sexy minivans and oversized SUVs.

I highly recommend test driving this vehicle if you are looking for a family car. It functions well for daily in-town driving, for shuttling kids and gear around, and it's excellent for road trips. I would buy the 2014 GMC Acadia if we were in the market for a new vehicle. We love it THAT much!

I was given the 2014 GMC Acadia pictured here to test drive for one week for review purposes. As always, all photos and opinions are my own.